December 9-13, 2018: Members of PALS convened at the annual American College of Neuropsychopharmacology conference in Orlando, Florida to present recent research related to the Network's mission.

May 10-12, 2018: Dr. McEwen hosted a symposium at the annual Society of Biological Psychiatry conference in New York entitled "Interdependent Metabolic and Inflammatory Mediators of Depressive Disorders in Animals and Humans" in which Dr. Rasgon and Dr. Nasca presented their data.

March 24-28, 2018: Dr. Felice and Dr. Reagan participated in a symposium entitled "Insulin resistance, Cognitive dysfunction and Depression: A common triad in Alzheimer's disease" at the American Society of Neurochemistry conference in Riverside, CA.

December 3-7, 2017: Members of PALS will be presenting at the annual American College of Neuropsychopharmacology conference in Palm Springs, CA. Dr. Rasgon will be chairing a mini panel entitled "Genetic, Epigenetic and Neural Correlates of Allostatic Load in Neuropsychiatry."

Below: Benedetta Bigio and Manpreet Singh postering side by side at the conference. 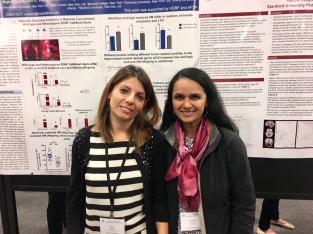 November 11-15, 2017: Dr. McEwen and Dr. Nasca will be presenting at the annual Society for Neuroscience conference in Washington, D.C.

June 29-30, 2017: Dr. McEwen helped host the Princeton Stress meeting, where members of PALS gathered to present their research and discuss ongoing contributions to the field of stress neurobiologyand neuroscience.

April 17-18, 2017: Mechanisms of IR in the CNS and Periphery Workshop (NIDDK) at the Icahn School of Medicine at Mount Sinai 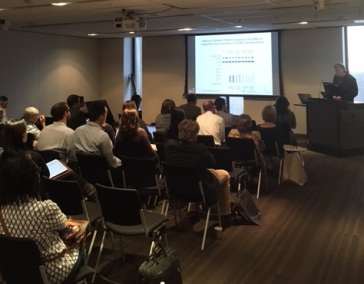 October 27-28, 2016: Inaugural PALS Meeting at the Icahn School of Medicine at Mount Sinai

Recommend this page on: